So there where two things I knew for a few years.
– Everyone always seems to have an awesome time at Hackathons
– I am not a developer, not even a descent scripter, how could I contribute to something like this?

Well VMware{Code}, who organise the VMworld hackathon, don’t care all that much what you can do going in.
The point is to learn and to have fun

A bit difference for me this year was being in the vExpert community. And as you might imagine, there is quite a bit of overlap between vExperts, VMware{code} community and innovative scripters. Well they where all very encouraging. So I decided to just throw myself in there!

Quite a diverse lineup of teams. I have wanted to get into Ansible for a while, so I immediately saw my oppertunity in Team4

I ended up taking responsibility for the presentation of our teams results, so I made the powerpoint which summarizes what we tried to achieve: 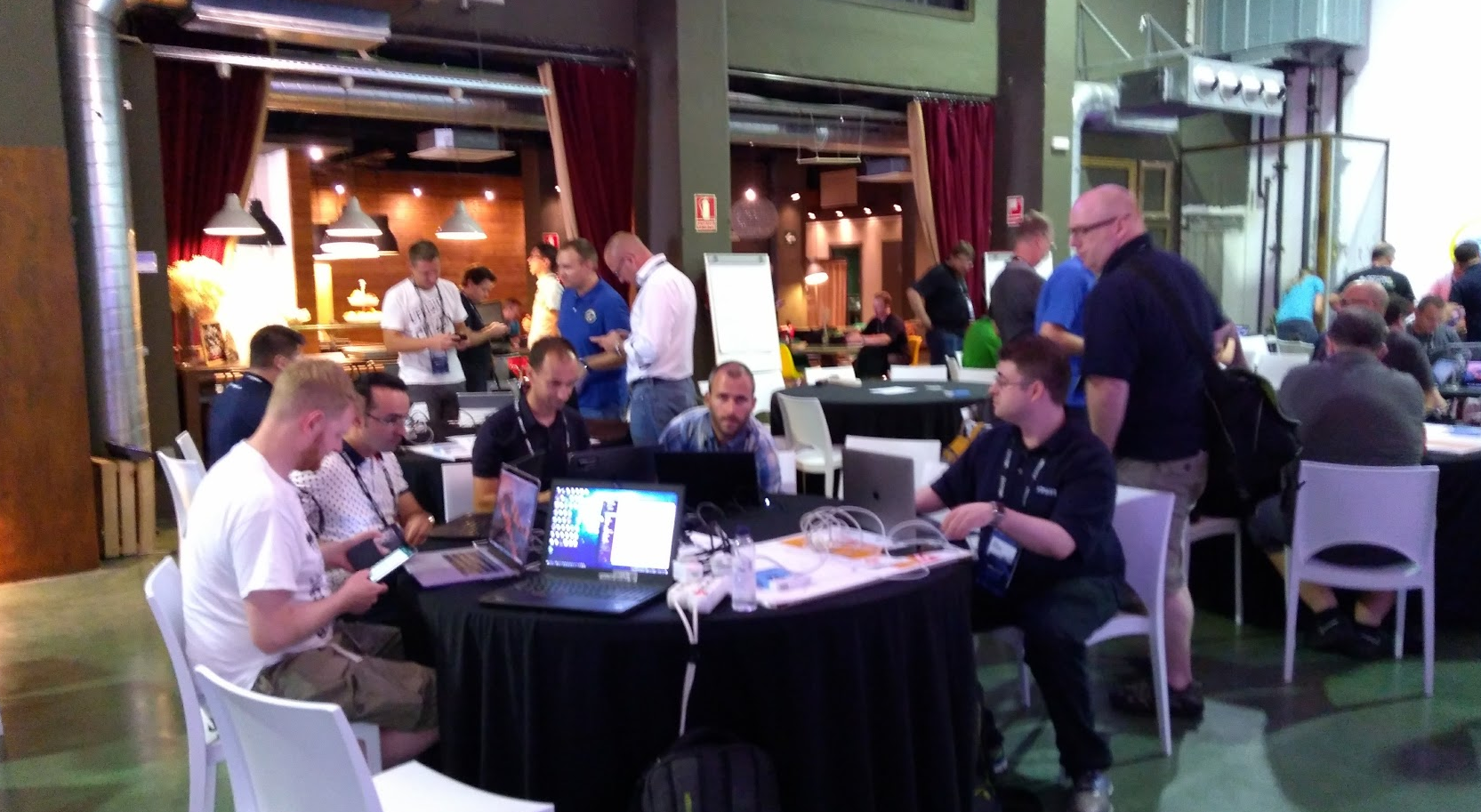 Getting ready to kick ass with team4 at the #VMworldHackathon pic.twitter.com/RFwQBMmyvG

Being both a Linux and Ansible noob, I spent most of my evening trying to get the VIC OVA copied onto my Ubuntu VM to test our deployment parameters.

Also, it took half an hour to deploy VIC each time we tried… this we called.. a constraint :p

However, I have to say that a lot of effort was put into providing us a cool deployment environment. They gave us the option to use the on-prem hardware they had set up in the Hackerspace where we at, OR.. to use VMware on AWS, which was of course very cool.
For practical reasons we ended up going on prem – mostly so it was easier to SSH in.

Excited to see which team will win the #VMworld 2017 Barcelona @vmwarecode #hackathon! pic.twitter.com/6xhQa9OxFP

I partnered with @kev_johnson (of the @OpenTechCast podcast) to create the OVF deployment part. Kev ended up doing 99% of the work. I contributed mostly by googling some variables and pointing out irrelevant things and distracting him. :p

While we didn’t really manage to test much of our solution, we did put all the Ansible roles and playbook in GIT. This was our main goal, to be able to contribute something to the community. And we succeeded in this. Its not finished, but its a great start! 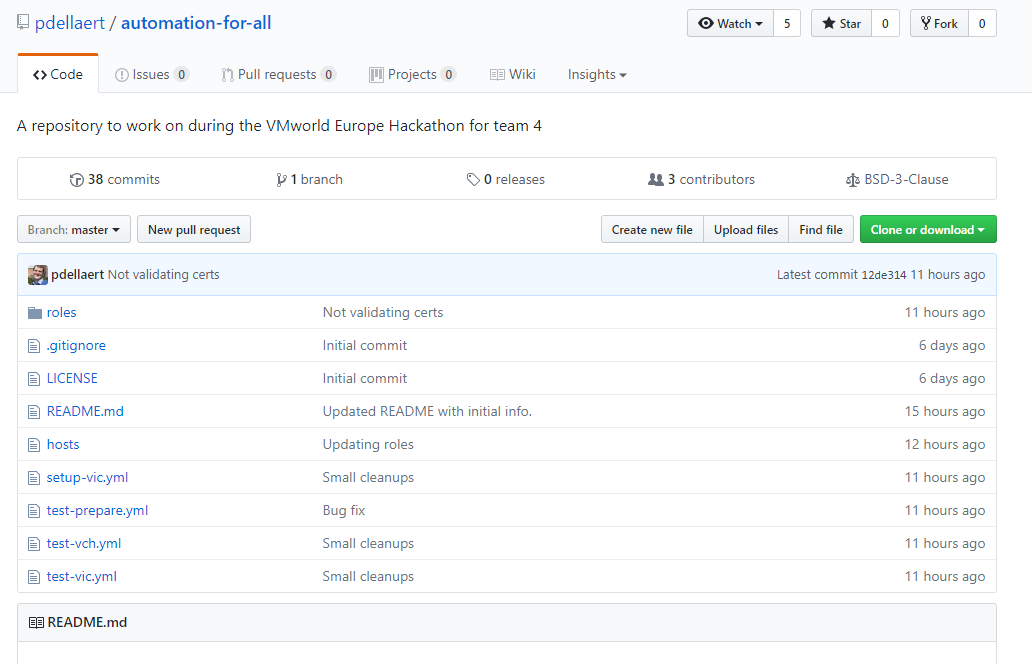 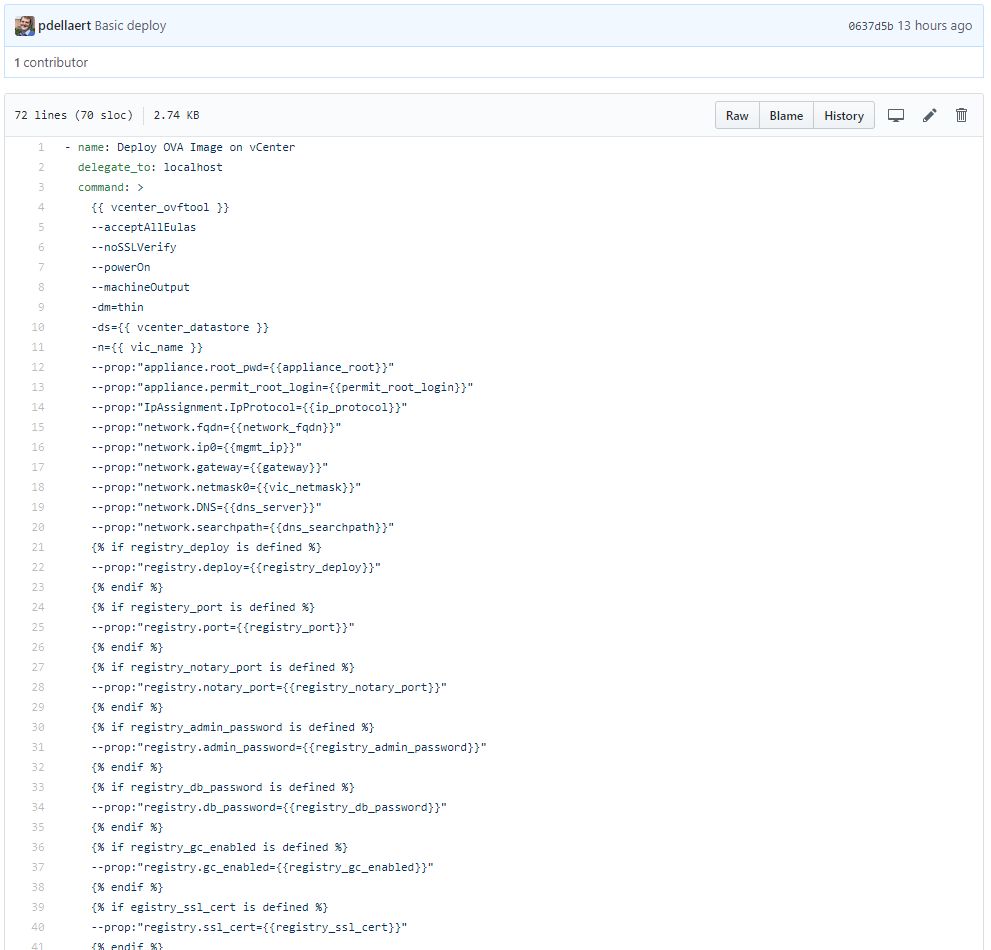 And the winning team is… team 2 ”Need for Speed”! #VMworldHackathon #VMworld pic.twitter.com/dnaUohfTf6

The main goal was to learn, and that we all certainly did do. I now have a far better understanding of where all the moving parts go for Ansible, and am happy to see its actually not all that complicated. I also learnt how to use GIT which will be extremely useful going forward. 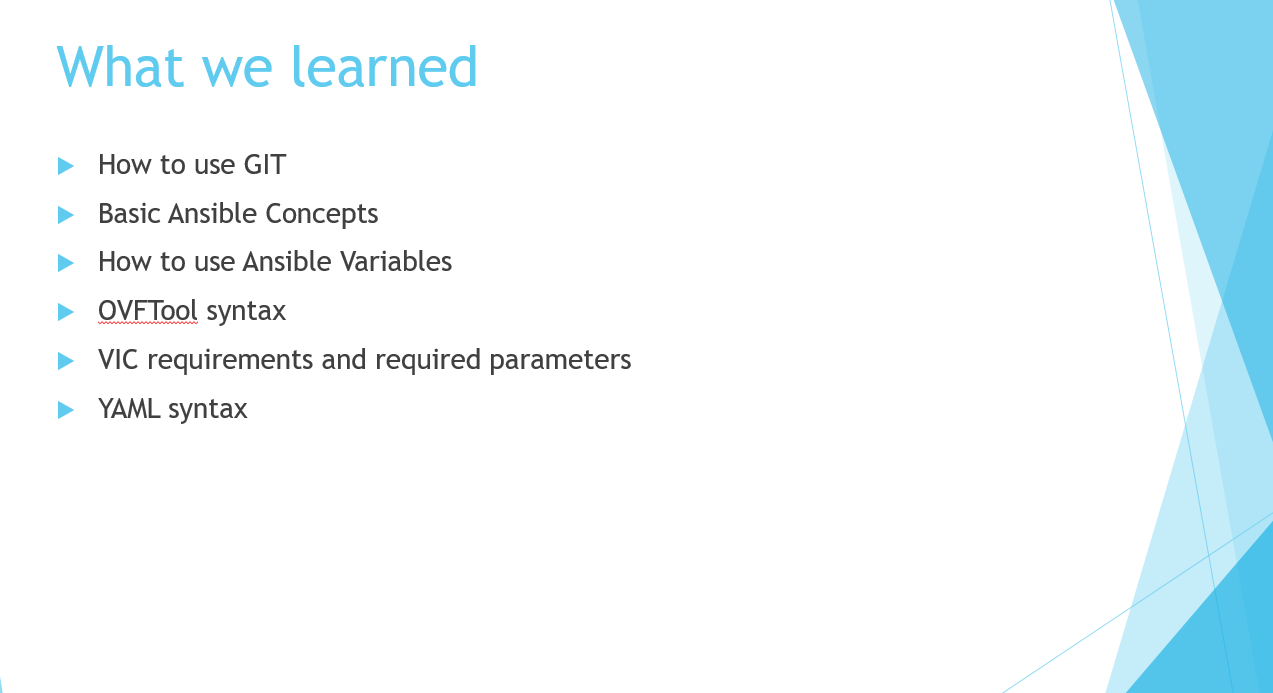 The main thing I could meaningfully contribute was my some powerpoint and the accompanying presentation of the teams results. Within 90 seconds!

Unfortunately, our ultimate gambit of bribing the judges with Belgium and Dutch chocolate products, did not succeed :p 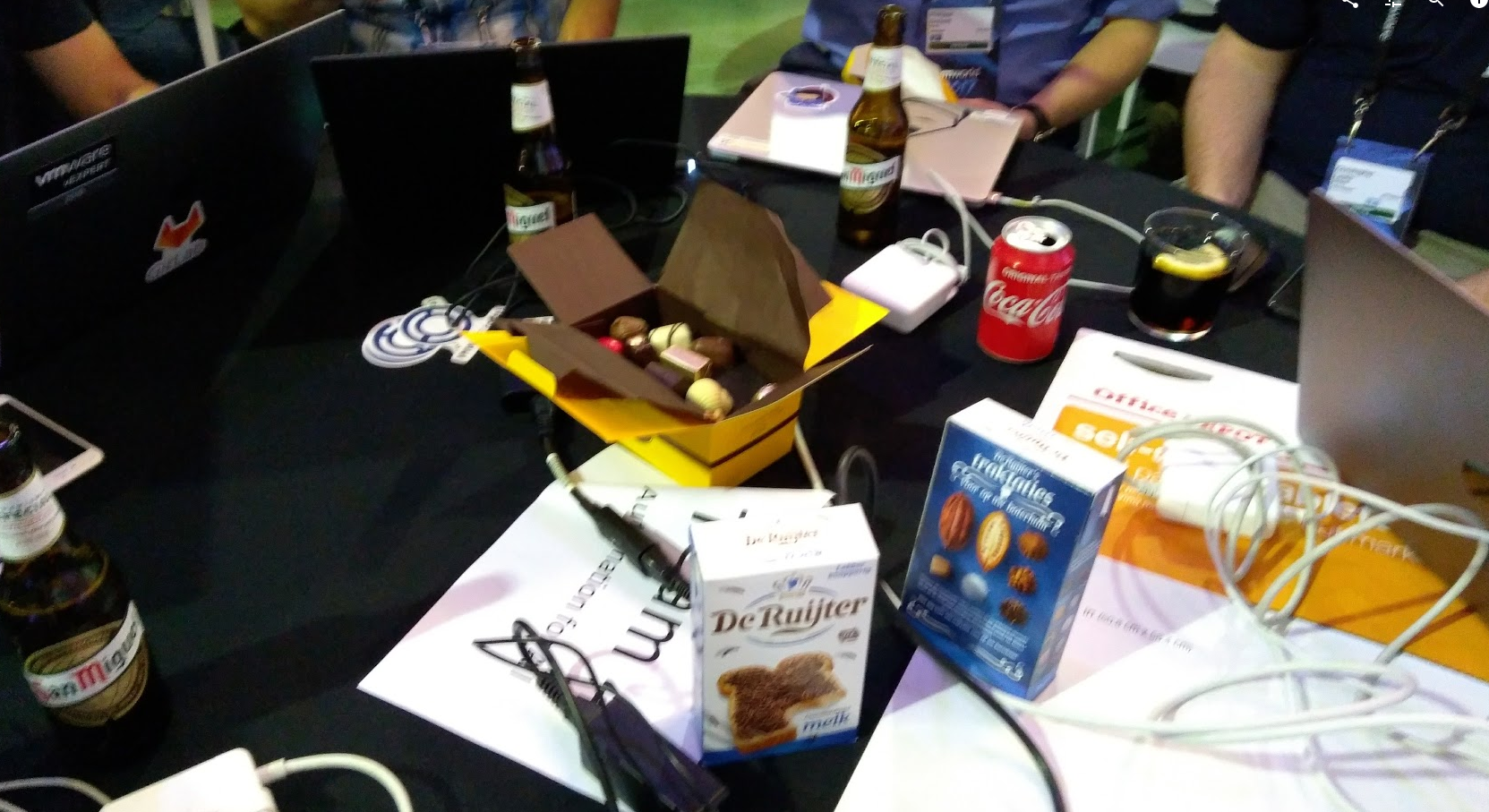 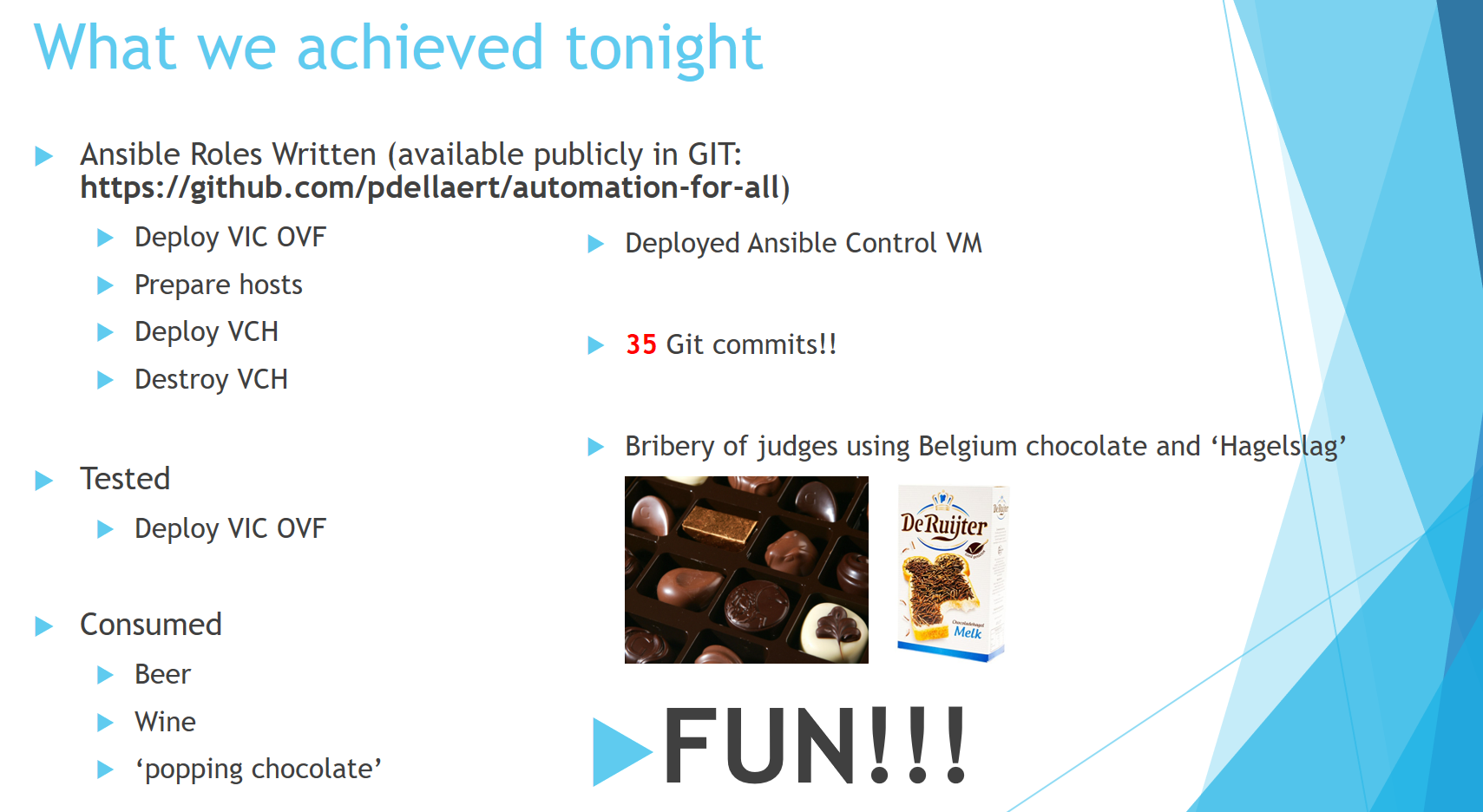 I want to give a MASSIVE thank you to our teamleader and inspirator: Philippe Dellaert‏ @pdellaert who really helped us get to grips with all this new stuff, and did a significant bit of preperation on his blog.

I want to thank our team, who really pulled together and took their tasks seriously:

And finally I want to thank the VMware{code} team and the judges for putting this all together and making this such a fun event!
Jake Robinson, Nikki Roda, Tim Bonneman, William Lam, Alan Renouf, Steve Trefethen and Ricky Trilago and everyone else involved. Great event! Hopefully see you next time!